Fitbit Versa 3 Smartwatch Review Is it Worth the Hype?

What’s new in the Versa 3

A new partnership with Fitbit Coach means that workout data can now be shared, saving the consumer time and effort in creating a personal workout plan for each member of the household. Fitbit Coach is not supported on every Fitbit device, but it’s now built-in to Fitbit Versa 3 with Ionic devices. The company also says that future Fitbit Ionic users will be able to access the Coach app as well as post workouts on Fitbit’s blog. There’s now a new ‘Relax’ mode that automatically tracks how much your heart rate drops during a session, while the Pulse Ox feature monitors blood oxygen saturation levels. The Fitbit Versa 3 has an enhanced three-axis accelerometer and an improved sleep monitoring feature that will tell you when your sleep quality is improving.

Fitbit Versa 3 is a fashion watch, and you’ll wear it with everything from a slim fitted suit to your favourite hoodie and trainers. It’s more a watch than a smartwatch because it lacks a screen, and it also lacks a heart rate monitor, with the trackers mounted on the underside. The sides are made of metal, with an angled display and clasp that are easy to put on, and it doesn’t feel like it’ll drop off your wrist easily. Unlike the Ionic and Ionic Steel, the Versa 3 doesn’t have any buttons, instead it relies on touch navigation and swiping through its menus and notifications. It’s a very nice looking and intuitive user interface, with light grey lines making for subtle yet efficient design. 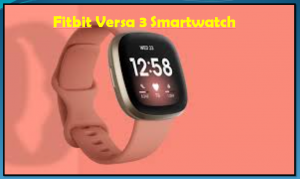 Can it compete with Apple Watch?

If you have an Apple Watch Series 1 or later, you have the most updated features on offer, including built-in cellular, so there is still some appeal for those who want to save some money and avoid the monthly subscription fees on the Apple Watch. That said, the Fitbit Versa 3 is compatible with iOS 12 and above, meaning it can compete with Apple when it comes to the overall design and ease of use. To be fair, it doesn’t have a keyboard or an improved display like the Apple Watch. That said, it does offer continuous heart rate monitoring, swim-proofing up to 50 meters, and various new apps that can record metrics like steps, floors climbed, heart rate, calories, and more.

Like its two predecessors, the Versa 3 is a little bit on the chunky side of a smartwatch. It’s definitely more of a fitness tracker than a smartwatch, and we’re not sure it would be comfortable on a wrist that wasn’t very slender. The circular 1.34-inch LCD is both brighter and clearer than before, although it isn’t particularly easy to read in direct sunlight, and it looks dated compared to the likes of the Apple Watch 3. The subtle change in display size from the Versa 2 to the Versa 3 is handy for those with smaller wrists, and the one-button interface is responsive and fast enough for most daily tasks. Unlike most smartwatches, the Versa 3 doesn’t feature a rotating crown. Instead, its three buttons are easy to identify and act as shortcuts to certain features. 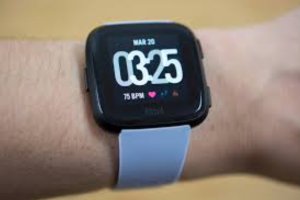 Price: $199.95 Water resistant up to 50 meters (helps keep track of swims) Wired remote is surprisingly convenient Compatible with iOS and Android phones Aquatimplete, Fitbit’s watch face library, is fantastic This is the first Fitbit I’ve had my hands on since the original Versa. While the Ionic focused primarily on fitness tracking, this time around Fitbit has gone for a more style-driven design, mainly because Ionic was a bit of a bloated device, albeit still a well designed one. The strap is now more like the Apple Watch than the Ionic, where the smartwatch elements were a little redundant. While the Versa and Versa 2 have similarly priced devices, Fitbit isn’t trying to steal the smartwatch crown with Versa.